When Is It Too Late: An Unsolved Mystery

You are here:
BooksChile Charlie 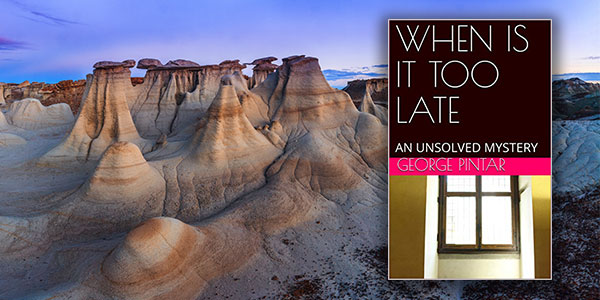 Follow Chile Charlie as he explores the ghost town of Madrid, New Mexico, pursing the facts in the case of an unsolved murder mystery that happened over 150 years. Through probing and insightful questions and observations, Chile Charlie brings readers along for the journey as they experience a Mexican wedding, a ferocious barroom brawl, a bustling stagecoach station, and slavery debates.

More than a simple “whodunit” this short but compelling story is a unique historical journey, inviting readers to learn more about the westward movement of the Anglo population and its impact on native populations prior to New Mexico statehood in 1912. As the mystery is solved, additional facts about history, culture, and economy of the village are revealed, too.

Does it sound a little strange that a character like Chile Charlie should go into the murder mystery business? It is not only true but he has researched this transfer to its fullest. He is now on his way to Madrid, New Mexico to see if he can solve the mystery that happened over 170 years ago.

Chile Charlie was tired after his all-day drive from Las Cruces to Madrid. He took refuge in the only facility open on this sunny day—the Old Boarding Mercantile House. The building was rebuilt to the specifications of what it would have looked like in the 1850s.

He found Avery Smart, a historian of sorts, in a relaxed mood at the Chamber of Commerce building in Madrid.  Chile Charlie asked Mr. Smart had he ever heard of the mass killings of five white males years ago.

Avery said, “Yes” and gave the following story that has been passed down over the years.

Mr. Smart sat comfortably in his wicker chair and started his story by saying, “The beginning of the story goes like this. Ramon Garcia and Rosetta Holguin are the key characters at the beginning of this story.  Chile Charlie I will have to give you some background.”

Avery continued the story by saying, “Let’s jump ahead in time when Ramon was 21 and Rosetta was 18.”

“Ramon was a handsome son of a farmer. His father was not rich but was very cultured. Ramon was a very hard worker and loved his father very much.”

“Rosetta was 18 years of age. She was a very lovely senorita and admired by many of the local gentlemen”

Avery looked like he was going into a trance and stated: “On a beautiful day of August in 1850, Ramon approached Rosetta’s father and ask him for Rosetta’s hand in marriage. Rosetta’s father knew Ramon as a hard-working young man with a bright future and approved the request for marriage.

Avery continued, “In the Mexican culture, the wedding wheels immediately started turning to prepare for the marriage ceremony. This preparation almost always takes 6 to 12 months to prepare. The date for the marriage was set for December 1, 1850. Both Ramon and Rosetta were extremely excited that the marriage would take place that soon.”

He went on with, “The wheels of preparation start to turn like a well-oiled machine. The mother of the bride is in charge of making the family guest list. The bride is in charge of making the friends’ guests list. Mexican Weddings oftentimes are treated as family reunions. Everyone from all sides of each family is invited, along with handfuls of friends, which means guest lists often exceed 200.  The church is secured as well as the Father to preside over the wedding function. The banquet hall flowers and other arrangements were made and recorded as is the custom within the Mexican wedding procedures.”

Avery continued, “The day of the wedding arrived and the traditions of a Mexican wedding adhered to all of the traditions. For example, the bride and groom are linked together with the lazos to symbolize the ties of love and trust joining them together. The placement occurs during a special wedding prayer before or after the bride and groom had exchanged their vows. The lazo is a large loop of rosary beads placed around the necks of the couple in the shape of an eight. The loop is a symbol of love that binds the couple as they share responsibility of marriage.”

Avery pictured the dress by saying, “Both Ramon and Rosetta were dressed in black. It turns out, black was cool and all of the bridesmaids wore black also. The attendants were called Madrinas and Padrinos . They have special roles in the wedding. The flower girl and rig bearer are dressed as miniature versions of the bride and groom. The madrina de ramo carries flowers for the Virgin Mary. Mexican wedding traditions celebrate a couple’s love, union, and cultural heritage. Mexican weddings tend to be large with many attendants.”

“What truly sets the wedding of Ramon and Rosetta apart as a prime wedding was the great attention to details placed on this wedding. A wedding ceremony occurs when the bride and groom solemnly undertake for a lifetime—some say forever—in the attendance of families and friends.”

Chile Charlie was taking all the descriptions in when Mr. Smart stated, “After the church portion of the wedding is over, the tornaboda then took over.