Musings of An Ostrich Farmer

You are here:
Books 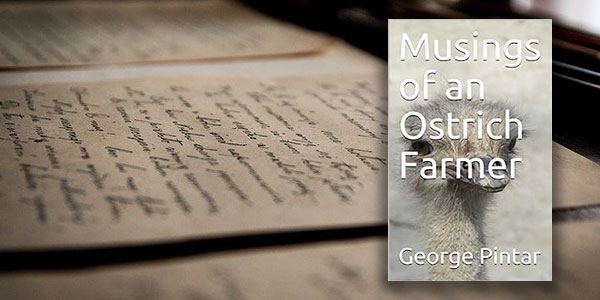 This volume of short stories gives readers a glance into the life and times of a writer who has been around the block several times.

There’s an old saying: “truth is stranger than fiction.” Some of the stories in this book have family legends associated with them and names have been changed to protect some identities. Sit back, relax, and enjoy the author’s stories, written as  fast-moving escapades of enjoyment and escape.

As told by George Pintar, Jr.

George Matthew Pintar II sat in his mother and father’s Croatian house and gazed into the large fireplace contemplating what he should do. Croatia was in a fierce war with the Balkan countries surrounding it. The Croatian government was conscripting all eligible males between the ages of 18 and 26 into the Croatian Army to fight in that war.

Grandpa George had a pamphlet describing a seven-year indenture pact of miners to work in coal mines in the United States. Grandpa George is not all thrilled about going into military service. But he was also not eager to leave his family.

After several long heart-to-heart discussions with his mother and father, Grandpa George looked into the indenture pact possibilities. What he discovered was it was his responsibility to get from his hometown of Mariana, Croatia to a port in France on his own. From that point forward transportation would be provided by a French luxury liner to New York City, New York USA. Then after immigration approval which had been pre-arranged, he would board a train to Illinois and be met by mine officials. They would then assign him to one of their mines in Illinois.

Decision time was fast approaching because military officials were scheduled to be in his hometown within one week. So the decision to take on the indenture pact was set in motion. The papers were filled out and submitted. George packed enough clothing and other essentials for his long journey.

His father who was a farmer and not very wealthy reluctantly provided Grandpa George meager expense money to help him through the next few months of his travel. His transportation and food for his ocean voyage were provided by the mining company of Illinois. That was in exchange for his seven years of indenture pact in the deep coal mines of the Midwest. Tearful goodbyes were said at the railroad station as he set out for France. This was to be a two-day journey.

Grandpa George’s train arrived in Le Havre, France in the wee hours of the second day of his trip. The luxury liner was scheduled to depart France two days henceforth. Another decision had to be made regarding how to spend his meager amount of funds while waiting for his ship to depart.

The local custom at beer gardens was free food with drinks. Growing up in Croatia children learn to drink beer or wine with each meal supervised by their parents. Grandpa George had a beer and a nutritious free meal of French bread and cheese. George plotted his breakfast, lunch, and dinner based upon the nearness to outdoor sleeping accommodations and the boat docks. He didn’t want to miss his luxury liner trip to the United States.

After the first night at sea, Grandpa Pintar was pleased that the ship was a peaceful place. No seasickness.

He was up early the first morning of the voyage, all clean-shaven and dressed. He was out of his accommodations and ready for the day’s sailing before the room stewards had wiped down the corridors. It was a calm morning, steady dawn, and the alley-ways were humming with the faint note of the progress that always fills a ship. Grandpa was gratified to discover a calm sea through his porthole, and when he stepped from his stateroom he was glad to find the sailors already at work. The feeling of satisfaction beset him toward the world and his fellow men.

“Cleaning her up, eh?” Grandpa George said, passing one steward. Fraternizing was good at any hour; it was pleasing to Grandpa before breakfast. He was glad, too, that he had remembered to call the ship her.

The crossing of the Atlantic Ocean was without incident. It was smooth sailing. The passengers became very acquainted with each other and to some extent enjoyed each other’s company. They played cards together. They ate their meals together. They enjoyed walks on the deck together. They became somewhat of a family.

When they entered the harbor of New York City and were ready to set foot on their new home, we can now tell the rest of the story.

George Matthew Pintar, Sr. lay in his bunk with a glaring red buzz. “Oh, damn that tune last night,” he thought. He lay flat with his eyes hot; the tongue in his mouth was thick and warm and sour. He dragged his feet out from under the blanket and hung them over the edge of the bunk, big white feet with pink knobs on the toes; he let them drop to the red carpet and hauled himself shakily to look out the porthole. He stuck his head out. Instead of the dark, it was fog, little gray-green waves slapping against the steamer’s scaly side. They were still at anchor. A gull screamed above him hidden in the fog. He shivered and pulled his head back in. At the basin, he splashed cold water on his face and neck. Where the cold water hit him, his skin flushed pink.