You are here:
BooksChile Charlie 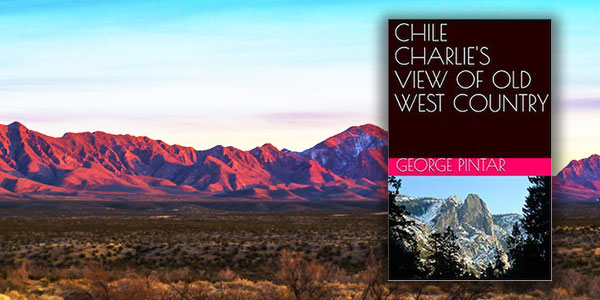 Chile Charlie is a fictional character that roams the great state of New Mexico telling readers about the history, culture and economy of the Land of Enchantment. Chile Charlie does this in a unique way by finding characters in each of the villages, cities, and counties that he visits and interviews them with questions, comments and observations.

His mode of transportation is an El Camino vehicle. It is light green in color with rusty fenders that are commonplace throughout the Land of Enchantment.

Sometimes Charlie gets carried away with his narrations and has been known stretched the truth to fit his own perception of a situation.

Now just sit back in your lounge chair and enjoy the stories of some of the counties in the southwest corner of the great state of New Mexico.

Chile Charlie went straight to the County Clerk’s office on the first floor wearing his black face mask over his nose and mouth. TRAVEL SOUTHWEST NM was embossed on his mask. The wearing of a face mask in public was required by New Mexico State law. The spread of the coronavirus was the cause of the state law.

He met Sarah Kelly the elected County Clerk for county. She served in that position for the past 24 years. Many times she ran uncontested for the position.

Sarah Kelly looked like she was in her mid-50s. She had a stern look of a bureaucrat. Her face was moon shaped and her lips look like she had just eaten fresh raspberries.

Chile Charlie’s told Sarah that what he wanted was to discover some of the history, culture and economics of Hidalgo County. Did she think she had time to provide him with the needed information?

“Yes I do have time today to give you that information Charlie,” said Sarah. “Would you please step into my conference room?” Sarah’s conference room was the size of a postage stamp. There was room for a round conference table and four chairs and two potted plants on the windowsill. But the room was going to be quiet so Charlie didn’t mind the size.

Sarah started her oration about Hidalgo County by saying, “We are located in the extreme Southwest corner of the state, bordering on Arizona and Mexico.

Hidalgo County was a ranching, farming and mining region many years before New Mexico’s statehood in 1912. Today Hidalgo County’s population is 4500 and covers an area of 3450 square miles. There are 1.4 persons per square mile. There are miles of open space, mountain ranges and tranquil desert.”

“Hidalgo County was formed when the southern half of Grant County was annexed in 1919. It was named in the honor of Miguel Dolores Hidalgo, who led the revolution in Mexico in 1810, which eventually led to its independence from Spain.”

“In 1880 Lordsburg became the county seat. Lordsburg is a railroad town established on the Southern Pacific Line which was a coast-to-coast railroad.”